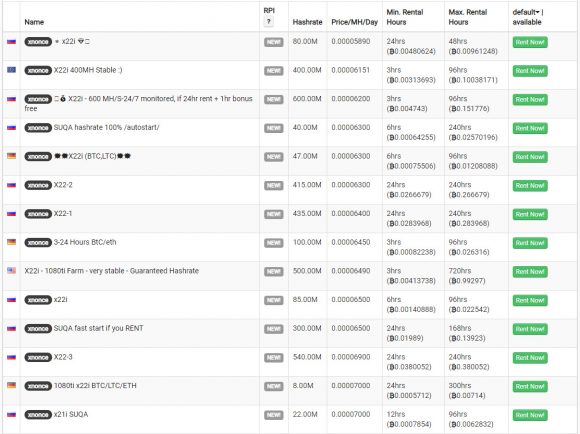 Monero’s planned upcoming hardfork to the new CryptoNight/CryptoNote V8 proof of work algorithm is going well and will just about a day left and miners already supporting the V8 algorithm people are getting ready to mine XMR. Even services such as MiningRigRentals where you can rent or lease mining rigs are already supporting the new V8 algorithm with rigs available. NiceHash however has also added support for V8, including support for their latest NiceHash Miner, so you can expect quite a lot of hashrate after the fork coming from the service.

The SUQA project that we recently introduced is continuing to gain more interest from users and its X22i algorithm has just been added to MRR. The good news for miners is that X22i is still too new and not big enough to catch the interest of NiceHash, though if things continue this way it will happen sooner or later. Anyway, SUQA is developing nicely with network hashrate growing as more users join the mining process and the project is progressing well on their announced roadmap, even though there is still some skepticism surrounding the 10% developer fee from each mined block.