Samsung’s foldable prototype smartphone — the one it’s teased for months — finally made its debut today at the 2018 Samsung Developer Conference in San Francisco. It sports what Samsung’s calling an Infinity Flex Display, and folds in half like a notebook.

The roughly 200-gram handset opens in portrait orientation, and the inside is coated with a film that evokes a printed photograph — a polymer consisting of a cover window, shock-absorbent film, polarizer that’s 45 percent thinner than the previous generation, and flexible layer and backplane. Thanks to a new highly durable adhesive, the primary 7.3-inch, 1536 x 2152-pixel (420 pixels per inch) screen can be folded “hundreds of thousands” of times without sustaining damage, Justin Denison, senior vice president of mobile product marketing at Samsung, said onstage.

The foldable screen is one of two screens for the handset. A 4.58-inch, 840 x 1960-pixel secondary (420 pixels per inch) “cover display” works just like any other, putting apps at your fingertips.

Samsung worked with Google to optimize Android for the phone’s foldable screen, and designed its newly announced UI that runs atop Android, One UI, with the device’s unique form factor in mind. Unfurled, it behaves not unlike a tablet, with enhanced multitasking features — including Multi-Active Window, which lets you run up to three apps simultaneously, and App Continuity, which seamlessly transitions apps from the smaller display to the larger display and vice versa — that take advantage of the added real estate.

If you’re looking at Google Maps, for example, the top-down view will expand to show a larger area on the 7.3-inch screen. 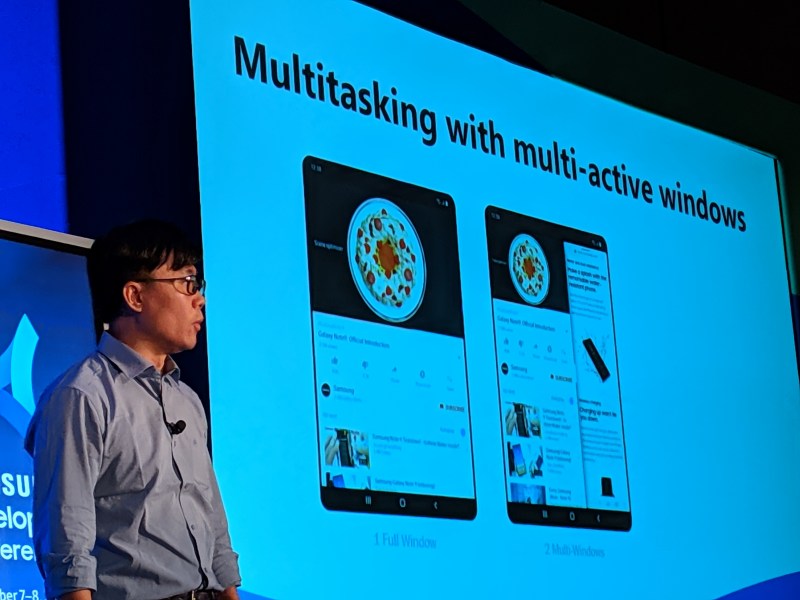 You won’t be able to buy Samsung’s foldable phone today, unfortunately — or this year, for that matter. Mum’s the word on availability, but some reports prior to this week’s announcement pegged early 2019 as the likely ship window for a consumer version. It could cost as much as $1,850 at release, according to the Korea Times.

To shore up early software support for the new form factor, Samsung’s working on an emulator that’ll allow developers to test things like how apps change when they transition from a “folded” to an “unfolded” state. And it’s working closely with select group of partners — among them Flipboard — to build bespoke experiences. 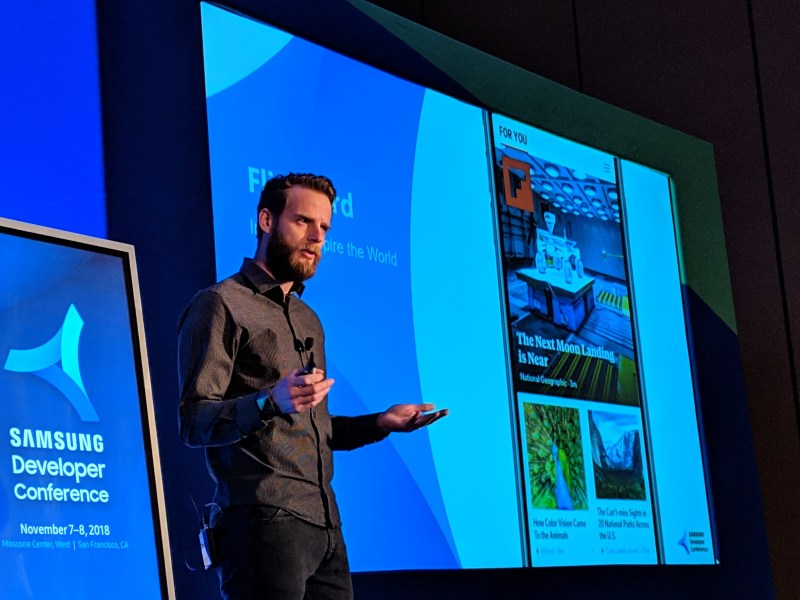 Other details were tough to come by at publication time, but we’re expecting to learn more at Samsung’s “New Galaxy UX” developer session later this afternoon.

Samsung’s foldable phone — codenamed “Winner” — is one of the smartphone industry’s worst-kept secrets.

The company demoed a flexible phone prototype (albeit one running Microsoft’s since-deprecated Windows Phone 8) back in 2013, at the Consumer Electronics Show in Vegas. A year later, in 2014, it reportedly held closed-door meetings with select software partners and VIPs, where the company showed a device with a 5.7-inch screen that could “fold like paper.” (It was said to use an ITO mesh film that’s resistant to degradation of the image at the folding point over time.)

In 2016, Samsung registered a patent with diagrams showing a clamshell-style foldable handset. As early as Q4 2017, it openly discussed the idea of new product lines with “foldable OLED displays.” And in the intervening months, DJ Koh, president of Samsung’s mobile communications business, has candidly answered questions about Samsung’s foldable phone ambitions.

Samsung is far from the first to attempt a foldable smartphone. ZTE’s Axon M, Kyocera’s Echo, Sony’s Tablet P, and NEC’s Medias took clunkier swings at the concept with multiple screens attached by a hinge, but all failed to gain meaningful market traction.

Lack of a compelling software ecosystem was in part responsible for their demises — a classic chicken-and-egg problem. Developers didn’t have much incentive to customize their apps for low-volume prototypes, and would-be buyers were deterred by the lack of apps.

With any luck, Samsung’s phone will avoid the same fate.

“The foldable display lays the foundation for a new kind of mobile experience,” said Koh. “We are excited to work with developers on this new platform to create new value for our customers.”